The Photography Contest will consist of five categories, each of which will have one Winner and two Honorable Mentions, and a grand “Best of Show.” This year’s theme is Focus on Olmsted Parks. Photographs will be judged on visual appeal, creativity and by category – Winter, Spring, Summer, Fall and Smaller Park (under 100 acres). […]

Olmsted Parks Conservancy’s Team For Healthy Parks has been hard at work restoring our meadows. Planted last year in Cherokee Park at the base of Baringer Hill, the restored meadow will provide habitat and food sources for animals and insects, reduce mowing areas, and sequester carbon. 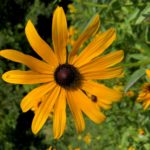 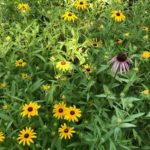 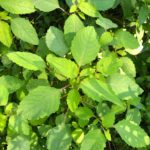 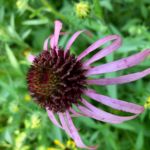 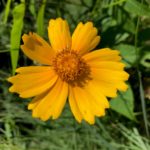 On a balmy June afternoon, the Team for Healthy Parks were managing a newly installed meadow at the base of Baringer Hill in Cherokee Park. In order not to harm them, we carefully watched our footing, navigating our way through black-eyed Susan, pale purple coneflower, lance-leaved coreopsis, jewel weed, and sideoats grama. We were removing undesirable and exotic species like mare’s tail and Queen Anne’s lace, and cutting back woody species that would shade out the herbaceous meadow plants. As we waded through these flowers and warm season grasses, we roused indigo buntings and gold finches. A baby rabbit scurried back to its den. We watched as solitary bees and honey bees collected pollen, and witnessed a wasp constructing a nest with dried grass.

One year after this small meadow was installed, it has become home to many native birds, insects, and mammals. The process of installation, however, can take up to 3 years, and must start with site preparation.

We often get asked how park users can make their own backyards friendlier for insects, wildlife, and the ecosystem at large – and drawing inspiration from (or even planting) a meadow is a great way to bring a bit of the park to your home.

Here’s how to restore or plant a meadow:

To increase the chance of successful installation, the seed bank must be cleared of exotic and non-desirable species. This step should begin at least one year, or depending on the severity of weed pressure, two years prior to installation. Removing these weedy species can be accomplished by solarization (placing plastic over the site), non-synthetic chemicals such as commercial grade vinegar, or herbicides. Regardless of the technique, the site needs to be treated in spring to eliminate cool season plants, and in the summer to eliminate warm season plants. A third treatment between the spring and summer treatments is recommended as well.

Once the site is prepared, the native seed can be broadcast between May and late June, or installed during dormancy in the winter. Based on the size of the site, the seed can be broadcast by hand, hopper, or with other implements such as conservation seeders and no-till drills that are specifically designed for native seed installation. These tools mimic the behavior of native plants, depositing the seed only one quarter of an inch or higher into the soil. This ensures greater germination rates.

Throughout the following year the site can look unimpressive, and sometimes even seem ill-fated. Exposed dirt and tiny plants will dominate. This early state is common while the seeds germinate and develop the deep root systems that nurture the plants and sequester larger amounts of carbon than their exotic, shallow rooted counterparts. It’s important during this first year to remove any exotic or undesirable species that remained in the seed bank. This can be difficult, as the native plants are developing root systems and will only produce rosettes, or basal growth, and not flowers. It is helpful to study the shapes and sizes of the rosettes of the plants installed in order to differentiate between native, desirable plants and exotic, non-desirable plants. If the meadow is well managed, it is very likely that the birds, insects, and mammals mentioned above will use this newly rehabilitated habitat.

Can I do something smaller that helps provide a habitat at my home?

The meadow restoration process is labor intensive and takes several months of preparation. This technique of installation is not always practical for homeowners on a small scale that are interested in creating pollinator habitat. Instead of depleting the seed bank and starting with seed, an old flower garden can be heavily mulched to reduce weeds, and small, germinated plugs can be used for immediate impact. Hardy, workhorse species that are great for backyard pollinator gardens include brown and black-eyed Susan (Rudbeckia triloba, hirta respectively), purple cone flower (Echinacea purpurea), butterfly weed (Asclepias tuberosa), tickseed sunflower (Bidens polylepis), and lance-leaved coreopsis (Coreopsis lanceolata). Most of these plants can be purchased at big box hardware stores, but can also be purchased locally at nurseries such as Frank Otte Nursery and Garden Center, Dropseed Nursery, and Wallitsch Garden Center.

Where can I see a Meadow in action?

To catch a glimpse of the rabbits, birds, or bees taking up residence in newly established and rehabilitated habitat, visit one of the many meadows in Cherokee, Seneca, and Iroquois Parks. To see firsthand the steps of meadow installation, visit the pollinator garden that’s being installed in Algonquin Park, scheduled for installation in September, and the new section of meadow that’s being installed at Summit Field in Iroquois park, scheduled to be seeded by mid-July.

In 1865 Boone Square was the location of the first organized baseball game in Louisville.