YOUR VOICE MATTERS! Give us your feedback on the new conceptual Natural Trail Plan.

When Frederick Law Olmsted was commissioned to design a park system for Louisville in 1891.

All events postponed or canceled

But our parks remain open. In the meantime, we hope you visit one of our 17 Olmsted Parks!

After several public meetings with Victory Park neighbors in 2016, Olmsted Parks Conservancy and Louisville Parks and Recreation finalized a Revitalization Plan that outlined work needed in the park. Initial work included the relocation of the basketball court to the northwest side to create a larger open area for activities in the center of the park. A new walking path, almost a quarter mile in length, now surrounds the open area. The installation of additional lighting, benches and trees accompanied this enhancement. Demolition of the old playground and sprayground area has begun, and construction of the new area is expected to be completed by early summer 2019.

“I’m very excited to see the construction begin at Victory Park. I’m thankful to Olmsted Parks Conservancy for all the hard work and financing they have put into this project. I know the citizens are excited to see their ideas come to fruition,” commented Councilman David James.

Layla George, President and CEO of Olmsted Parks Conservancy, said, “When we launched the Campaign for Extraordinary Parks and began talking to donors, they wanted to invest in this park and in this neighborhood. I am proud to say that we ended up raising $1.27 million for Victory Park—three times our initial goal. Everyone wanted to be a part of the revitalization of Victory Park.” 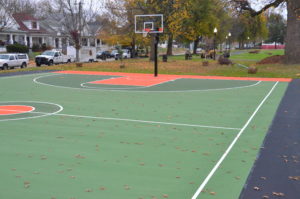 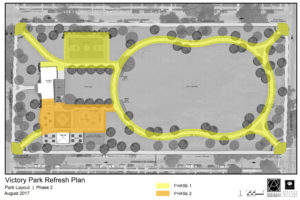 During the Civil War, Olmsted was General Secretary of the United States Sanitary Commission, forerunner of the American Red Cross.